Stepping Out of Comfort Zone and Seeking Opportunities Beyond Physical Limitations 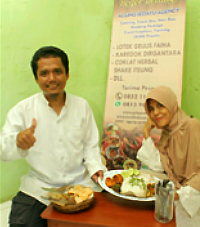 Agung was a healthy, active man from a simple family of 9. He was proud of his mother and idolized his father; however, his world came to what seemed like a stop the moment he learned that he was left out of the will because he was adopted. It was during his lowest point in life that he met his wife, who rewrote meaning to his dark world. He was living a very promising life with his loving wife and 2 healthy children until in early 2017, when his motorcycle was blown of the road by a whirlwind; he and his daughter were thrown 5 meters away, and as he shielded his daughter, he lost his left leg for good. For the second time, he lost hope in living. No matter how much he wanted to be strong for his family, he could not shake off the feeling of helplessness. His wife had to take loans to cover his medical bills and to support the family needs. Feeling ashamed of his disability, his insecurities stopped him from going out of his house and be seen among people.

Once again, it was his wife that gave him strength and strengthened him. She persuaded Agung to accompany her to the Maybank RISE training, and to her surprise, he did come. The RISE training, was the first event he attended since he became disabled and little did he know it would be the turning point of his life. It was during the training that he truly accepted his condition. He grasped the notion of his new life, his new opportunities and challenges, but also how exciting life could be. There was something in the trainer’s words that gave him hope and confidence.

He started his catering business, and from what he learned during the training, he managed to get orders from the government to supply food and inventories for Japanese foreign exchange students. That contract was valued at more than USD 13,500. Both he and his family were overjoyed and proud of his achievements. It was more evident to him that his disability was not a barrier for him to attain success.

With his new success, he not only paid off his family loans, but he also paid the debts of other disabled friends and helped them to market and sell their products through his business. He felt now he had a cause to help those PWDs who were in need just as he was. He paid of debts of those PWDs in need because he knew the pressure of living in debt. Not only did he understand the struggles of disabled people, having experienced it himself, he now had a strong drive to help the disabled and empower them as well. He is currently in the process of establishing a disabled entrepreneur community center called the “Indonesia Disable Centre”, in which he will share business opportunities, knowledge and information with the members. He believes in the power of sharing, and that his success is the result of people sharing with him, especially the R.I.S.E trainers and mentors, and therefore feels indebted to continue the ripple effect and pay it forward.

After the RISE launch event in Yogyakarta, using his own savings, he managed to bring his family to Solo in search of his real parents. It was an exhausting 1 week of searching, but it was fruitful. After several sleepless nights, wrong turns and seemingly dead ends, Agung managed to fill one of the darkest holes in his heart, by meeting his real parents; and letting his children meet his real grandparents. Agung continues to champion the plight of PWDs in his area and is looking forward to the day his community center is built and can impact more PWDs. He has nothing but gratitude for Maybank and Maybank Foundation that has changed his life.