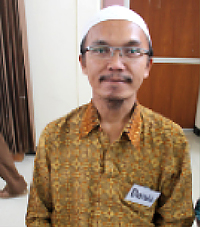 Dandik graduated from Brawijaya University with a mechanical engineering degree in 2005. While he was leading a simple, normal life with his family from his first marriage, it was in 2010, on a very late night that he heard noises at the backyard of his house. While his wife and child were sound asleep he was forced to confront a teenage burglar. In the spur of the moment, he tried to grab on to the burglar, and in an instant, the burglar swung his machete on to Dandik’s skull. It was that traumatic incident that made him paralyzed on the right side of his body.

His employer forced him into an early retirement because of his injuries and disability resulting thereafter, and it was then that his life started to face a big down turn. A Couple of days after his surgery, his wife demanded a divorce from Dandik; the main reason for her divorce request was due to his inability to further support the family financially. He agreed, but it took a toll on him and he had to go back to his hometown where he then struggled with life.

In 2015, 5 years after the incident, he joined a religious community and it was there that he met his second wife. His wife was a widow with 1 child and she was an activist for the marginalized and a religious activist. His wife and her family were very supportive of him, which felt to him like a new ray of hope to his bleak life. His wife and him moved to Bogor to restart their life. Every morning, his wife would bake cakes and Dandik would sell them around the housing complex on foot. In 2017, he attended the Maybank RISE training, and it was where he learned about targeting big customers and finding cost efficient suppliers. After immediately applying the knowledge he gained, he managed to get regular big orders from 2 nearby mosques. He implemented other strategies taught that boosted his sales significantly.

As his business progressed and he became more and more successful, he never forget to give back. Everyday, he looked for those suffering from poverty in his area and gave away his breads and cakes to beggars and hardcore poor people within his area. To him, a small act of love would mean the world to someone in need; as he had painful experiences on his own from his own past

With his business growing, he was able to provide financial support to his wife and children. He started sending money to his first family and first wife who divorced him. It was neither required by law, nor was requested by his ex-wife, but it was by his own goodwill and compassion as a father to support his child financially. There was once a time when Dandik dared not see his child from his first marriage due to his insecurities of being a failure as a father. Today he confidently spends time with his child without a hint of shame in his heart. He is also is financially able to fund the education of his step child in a boarding school in Sukabumi. In Dandik’s opinion, that was the least he could do as the head of the family. For him to be able to support the lives of his wife and his two children is a life achievement.

Dandik is forever grateful to his wife and her family, and as his token of gratitude he is now saving money to buy his wife a new motorcycle. While it used to be merely a dream for him to treat his wife with luxury, it is now slowing becoming a reality. He will soon be sponsoring his parents in-law to go on a pilgrimage trip to Mecca. To Dandik, it is not just about how much he earned, but how much he can give back to the people he dearly loves. He is extremely grateful to Maybank Foundation as he credits a lot of his breakthrough in business to the R.I.S.E. programme.