We are committed to providing humanitarian aid in our disaster-prone region and support communities in rebuilding their lives. Our employees have shown great compassion by volunteering their time and money when disasters strike. 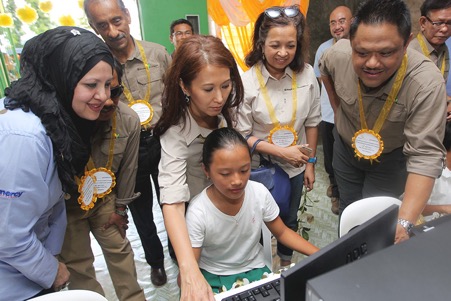 Maybank and Maybank Foundation have supported disaster relief efforts across the region, often aiding the ASEAN communities to recover from the impacts of typhoons and floods in the Philippines, Indonesia and Malaysia.

We have collaborated with several NGOs in rebuilding communities and their livelihoods in affected areas around Southeast Asia. One of the contributions that were highlighted would be the assistance that the Foundation has provided to the Typhoon Hagupit victims in the Philippines.

We have built a strong alliance with MERCY Malaysia. From 2014 until 2016, the Foundation provided an annual contribution of RM1 million as part of our 3-year partnership. The partnership was focused on disaster response, rebuilding efforts (post-disaster), and risk education programmes. Funding was used for the deployment of emergency responses, medical supplies purchases, and developing Disaster Risk Reduction (DRR) preparedness programmes.

In 2014, we have provided support on the following initiative:

In 2015, we have provided funding for the following initiatives:

In 2016, we have collaborated with MERCY Malaysia on the following initiatives:

At the completion of the ‘Partnership for Humanity’ in 2016, we have embarked on a new Disaster Relief Framework in 2017. The execution of the programme and ensuing funding is premised on activities in 2 core areas:

In 2018, we have funded the emergency response for four disasters:

In 2020, we responded to the world pandemic emergency and funded an emergency response for a disaster: